You may all agree that our beloved OPIUM needs more utility. Currently OPIUM token governs Opium DAO, which controls the protocol and Ecosystem fund. Besides this governance and possibility to stake OPIUM into AMMs and Options Selling pool there are no other utilities, however protocol got the traction and we need more utility.

One of the most successful, already audited and battle-tested mechanics for token was introduced by Curve (veCRV) and it looks like it’s very well suitable for Opium Finance Pools.

Let’s rewind the current progress of Opium Finance Pools. According to https://opium.watch/ Opium Finance Pools started to generate tremendous volumes since November 2021, thanks to the set of Market Makers using the protocol and utilizing 100% of the pools every Friday. By receiving premiums from Market Makers pools are generating attractive yields with clear risks. (Kudos to the Opium Team and other contributors!) Bringing more TVL into the pools will increase the volumes, users engagement and future fees.

What I propose here is to introduce veOPIUM smart contract which allows locking OPIUM tokens and receiving veOPIUM non-transferable tokens in return.

Locking OPIUM may be done for time periods from 1 week to 2 years. Unlocking OPIUM in full amount may only be done after the whole period passes. However, if veOPIUM holder will decide to unlock it’s tokens before the period passed, it may do so by paying the penalty (giving away part of it’s OPIUM to the remaining veOPIUM holders. 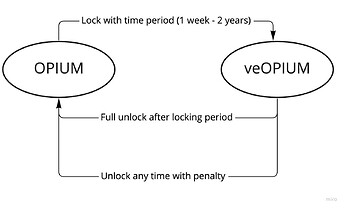 The longer you lock your OPIUM for, the more voting power you have (and the bigger boost you can reach). You can vote lock 1,000 OPIUM for a year to have a 500 veOPIUM weight. Each OPIUM locked for two years is equal to 1 veOPIUM.

Here is the example:

In order to target 15M$ in TVL and having 5% APR in rewards we need to distribute 100k OPIUM/month. I’d suggest we start with these assumptions, actively monitor the outcome and evaluate the rates. We can initiate voting to increase / decrease distribution rate anytime.

List of the pools participating in rewards distribution may be adjusted later by additional voting. 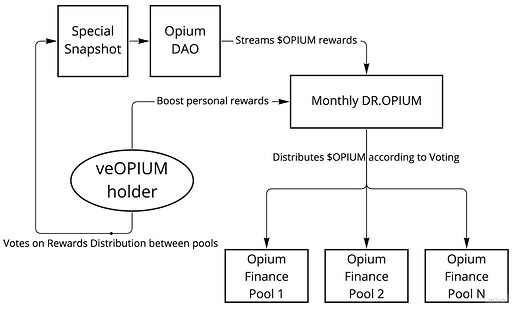 I think that on-chain voting and usage of Curve’s Gauge contracts for this proposal is infeasible and is an overkill, thus I propose to use the technical setup already common to Opium Community - DR.OPIUM.

What I suggest here is that we create a separate new Snapshot page for veOPIUM holders voting only, where on monthly basis we will be performing voting on:

Rewards calculation for all pools will be performed by open sourced off-chain tool which will then be used as a source for DR.OPIUM rewards deployed on Polygon with a 50% charity fee decaying in 3 month period (same params were used for other liquidity mining programs) over the last year.

I still have some concerns I’d like to discuss: