I think we’ve been kept on a leash about the continuation of the mining program for the ETH-OPIUM pair. I’ve heard for weeks “we just have to update the UI” just to hear it has been cancelled.
The OPIUM token is worthless if these changes are made without voting whatsoever.

My proposal: 500k OPIUM “airdrop” (without using DR.Opium) for people who provided liquidity after the second week of May counted from genesis of the ETH-OPIUM.

Why from the genesis of the ETH-OPIUM pair?
Early liquidity providers have much impermanent loss which must be compensated. Especially if you think the new mining program (on Bancor) has impermanent loss protection…

Should ETH-Opium liquidity providers be compensated for impermanent loss?

Other proposals are welcome.

Why 500k? How did you arrive to that sum? If there is to be some sort of compensation it should be rooted on some calculation. What was the overall impermanent loss for the early liquidity providers? I think the formula should be something along the lines of: IL (minus) last 1 month TWAP of 1inch rewards (minus) last 1 month TWAP of Opium rewards. Once we arrive to the total sum we should talk about the impact such an airdrop would have on the whole ecosystem.

I agree, that there should be some compensation, but yeah 500k is for that is pretty damn ridiculous.

April released 250k in Opium so 500k is not that “damn ridiculous”.

I’m in favour of some sort of compensation as I got a lot of IL from participating on the pool and helping the community by providing liquidity.

@dennis we could come up with a number that’s has some backing on the actual IL amount, as suggested by @Perma_Crabbing . We’d need to also calculate the compensation based on how long an address was in the pool for, to reward people that supported the program for longer.

For example, that’s what I experienced:

I joined the pool when it was first created and left it last week when I discovered that the pool was discontinued, even tho it was supposed to be ongoing and there was no voting for discontinuing it, just the message on Telegram saying that something would be announced “soon”.

I have just under 600OPIUM on Dr.Opium smart contracts, that I’m waiting to finish the charity period as well as waiting for some more reasonable gas fees to then withdraw them. 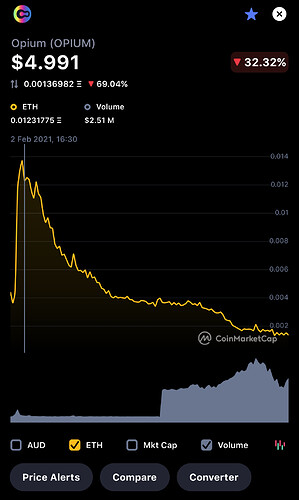 That’s how much value OPIUM lost in relation to ETH since the beginning of the pool. The rewards in the first couple of months were also quite low, I believe the reward for the whole month of February was 50k OPIUM, and towards the end it was 50k OPIUM per week or there about.

Almost a month has passed. what’s going on?
The payout should be at least what was supposed to be distributed during the period of May plus some for compensation according to the weights per staker. say 250k + 50k in total.

So, I guess we have a couple of issues we could propose solutions for:

For this issue, I’d suggest we keep the initially approved rate of 50k OPIUM per week. And to help with gas fees and other headaches, I’d suggest to bypass the Dr.Opium process and instead just drop the tokens directly to the liquidity providers for the period.

So basically the vote is to whether to use Dr.Opium or not. I don’t believe anyone can argue against the fact that rewards must be paid for the 2 first weeks of May, as there was no vote to finish it.

I’d also consider options to honour the whole month of May, and pay 200k OPIUM as some people might have joined the pool towards the end of April, beginning of May and got screwed with IL and gas fees.

I don’t believe that would be ever accepted and I don’t feel like it would be the right thing to do. I also believe that while Opium price is devalued agains ETH, it should increase as the project gets more popular and is listed on CEXs. With that in mind, I believe that the answer for how much to compensate, it would be somewhere in between 25% to 50% of the amount I posted above, or in between 800k OPIUM and 1.6M OPIUM. I’d also consider having a lock up period on those tokens, to prevent them being dumped in the market as many would do.

Please let me know if the numbers make sense or need adjustment. Please share your opinion and or experience so far.

I do agree.
I started end of february to provide in the LP.
Now doubled my Opium, but lost 44% of my ethereum… and Opium is just shit value now

Some compensation is appreciated.

@andrey , @alirun as part of the Opium team, what are your thoughts with regards to the issues discussed above?

Team should provide extra OPIUM for compensating. Part of IL is caused by the unclear and chaotic LM annoucement, There is only one LM in 1inch now, which is not good for bootstrapping the liquidity.But the amount of OPIUM should be discussed carefully ,as we know, IL is common for AMM, we cant let Team be responsible for all the IL

@KevinZ do you have anything in mind regarding how to calculate the amount to compensate IL? What are your thoughts on what I proposed above for the 2 proposals and the amounts/options suggested?

@KevinZ that’s sort of how I based the numbers above, based on my experience providing liquidity for the whole period the 1Inch ETH-OPIUM pool existed.

That’s why I suggested the numbers above and with a compensation amount in between 50%-25%. DO the numbers I presented above make sense?

There is also the issue for not giving the rewards for May, as the pool was “cancelled” half way through the month, with no community voting, and for the first 2 weeks, the team was claiming that while there was nothing in the Opium mining page, the rewards were still getting counted.

I have tried to engage two members of the team to come and share their views in this thread, but it appears they haven’t had a chance to look at it yet.

It makes sense,I agree with your calcaulation.
But I think we need cal it considering the global condition,as for you,you lost 6.5eth ,so you proposed for 7x compensation, but we dont know the others’ IL,we dont know whether the condition is same or not in both sushiswap and 1inch ,so is it necessary to cal it respectively? In that way, so the compesation multiple could be above or equal or below 7,then multiply it with discount(I think it should be how much the team should be responsible for)
Anyway, we need data to convice the team
And we need team to do a clear LM announcement in the future, 200k reward per month is not good for bootstrapping the popularity,I think the IL is due to circulating supply in the market, current circulating ratio is so low and most opium pair trades happen in DEX,so LP for Opium is more vulnerable to risk,so LP need more reward to hedge the high IL risk. So I suggest the circulation supply could be over 10m by the end of the year,what do you think?

ried to engage two members of the team to come and share their views in this thread, but it appears they haven’t had a chance to look at it yet.

Just live: It was hard to get through the Bancor DAO, but $opium now is whitelisted and there is a pool with IL protection (check Bancor terms!) 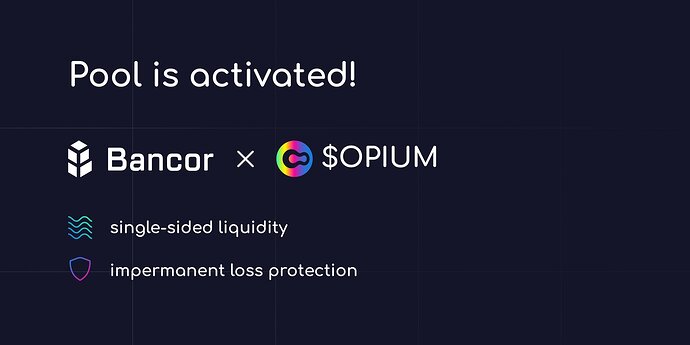 🎉🎉🎉 Congrats to community! @Bancor pool is activated You can now stake your Opium tokens: - to provide single-sided liquidity (only $Opium token) - with full impermanent loss protection (thanks to @Bancor pool)

On your question: IL risk is part of any liquidity mining, all the market and most of the pools are in the same position. I really in favour of good solution, thats why team did great job on Bancor pool and preparing several liquidity mining and thinking of possible loyalty rewards. Any constructive ideas we should discuss!

The main complaint here, is that we were told the liquidity mining program would continue through may. Then two weeks into may (after a big price dump too) the program was terminated without warning or compensation. Had I known the program would be retroactively canceled I would have removed liquidity at the start of the month and saved myself a lot of pain. At the very least you should consider distributing the corresponding rewards for those two weeks.

A similar situation happened with the BSC pool, we were told the program would continue until it was decided it would stop and that we would be warned BEFORE it ended.

I’ve checked other pools from 1inch (+ some similar projects) and compared their IL with the ETH-OPIUM pool. 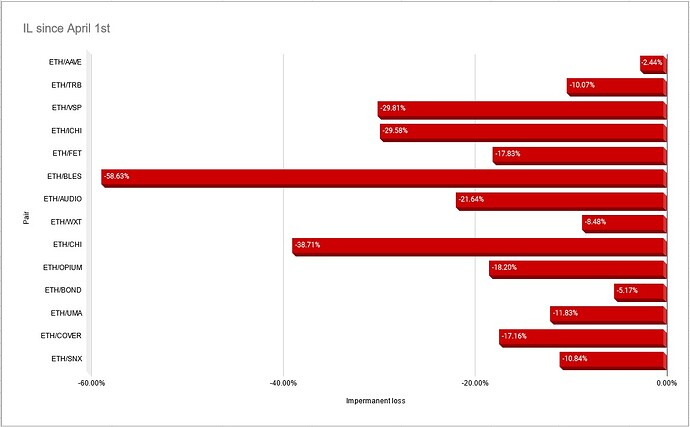 Exactly this. Without prior discussion or warning, what do you expected the community’s reaction will be?

Note that this is since april and not since the beginning, most loyal participants have higher IL. Overtime farming profits can diminish IL. Which was probably the strategy of most OG LPs.

I see your point, I have asked communication team to explain what happened. We should work something out regarding this, I agree.